Cusco is a wonderful city, with beautiful attractions of worldwide fame. This time, we wanted to go a little further and explore other incredible places in the region, those that are outside the traditional tourist route. For four days, we discover unique landscapes and stories, which have nothing to envy to the most popular destinations.

The adventure begins in the town of Andahuaylillas, one hour from the historic centre of Cusco. The San Pedro Apostle church waits for us, also called the ‘Sistine Chapel of America”. This temple is known for its impressive architectural design and the mural paintings that decorate the interior, which dates back to the 17th century. They were made to educate the natives about the principles of the Christian faith brought by the Spaniards. Watching the altar carved in wood, the gold-plated decorations, and the canvases of the Cusqueña School is a fascinating experience. A mandatory stop for every art lover. 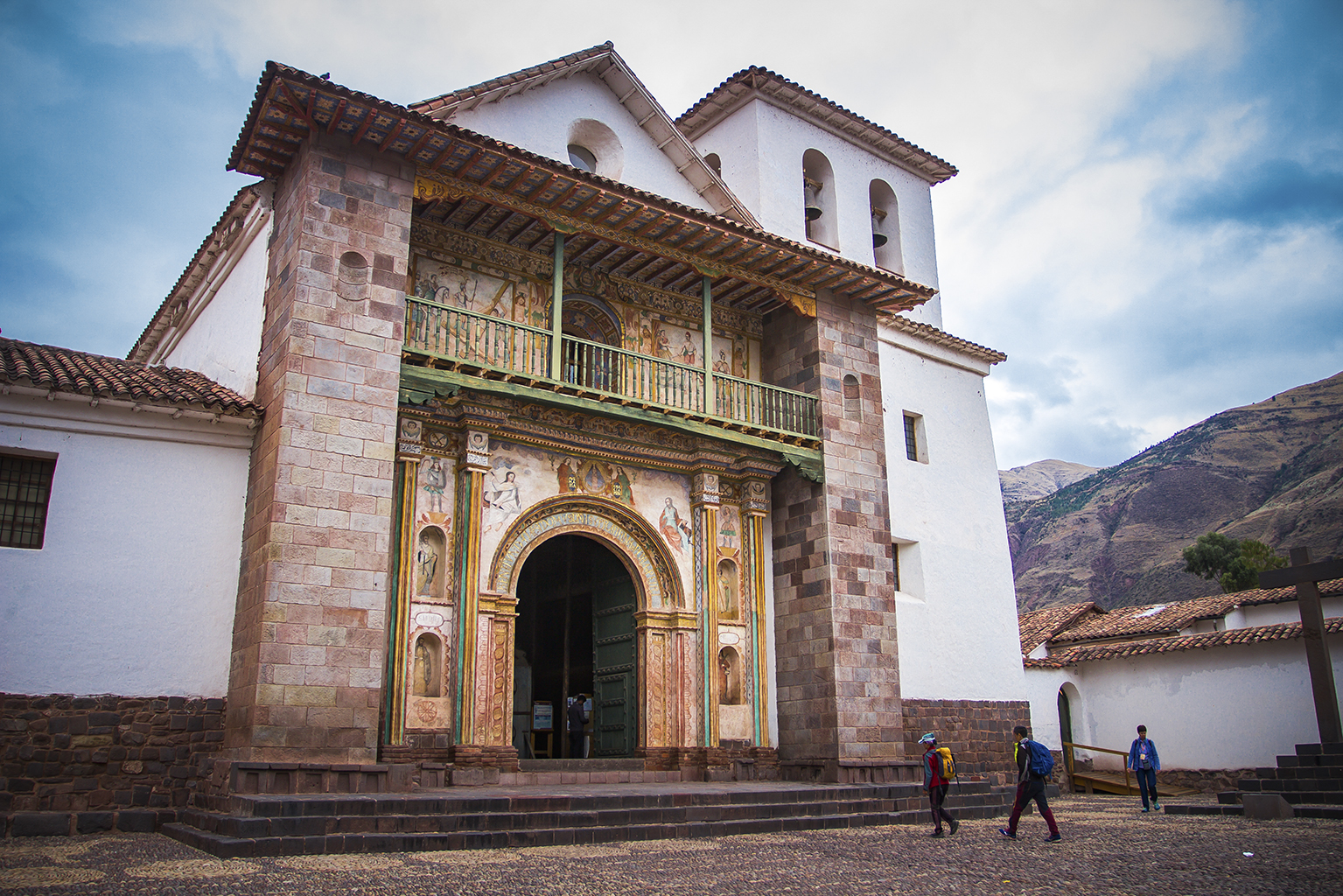 We go to another architectural jewel just minutes from Andahuaylillas, the Chapel of the Purified Virgin of Canicunca. A beautiful 17th-century building, which despite its simple exterior, hides an interior rich in wall painting with textile motifs like curtains with gold leaf ribbons and iconography characteristic of the Andean Baroque.

An hour later, we arrived at the district of Checacupe. Time seems to have stopped here and allows us to travel through the history of Peru thanks to its three bridges built at different times. A Republican bridge, erected in 1895, made of railroad tracks where old coal-powered machines passed. A Colonial bridge, built between 1759 and 1788, a stupendous road work with a base of carved ashlar stone with Roman arch-style joints. And the Inca bridge, prepared by order of the Inca Wiracocha between 1400 and 1448 as part of the Qhapaq Ñan.

The afternoon falls, and we arrive at our last stop of the day, the archaeological complex of Kanamarca. This place occupies 1 hectare and is composed by constructions made by the Incas and the K´anas. At the highest point, a privileged view of the complex with the mountain range in the background surprises us while the guide shares stories about the warrior and unshakable spirit of the K’anas. The rain that received us is getting stronger, and hail makes the exploration come to an end. You never know what the Apus have prepared! 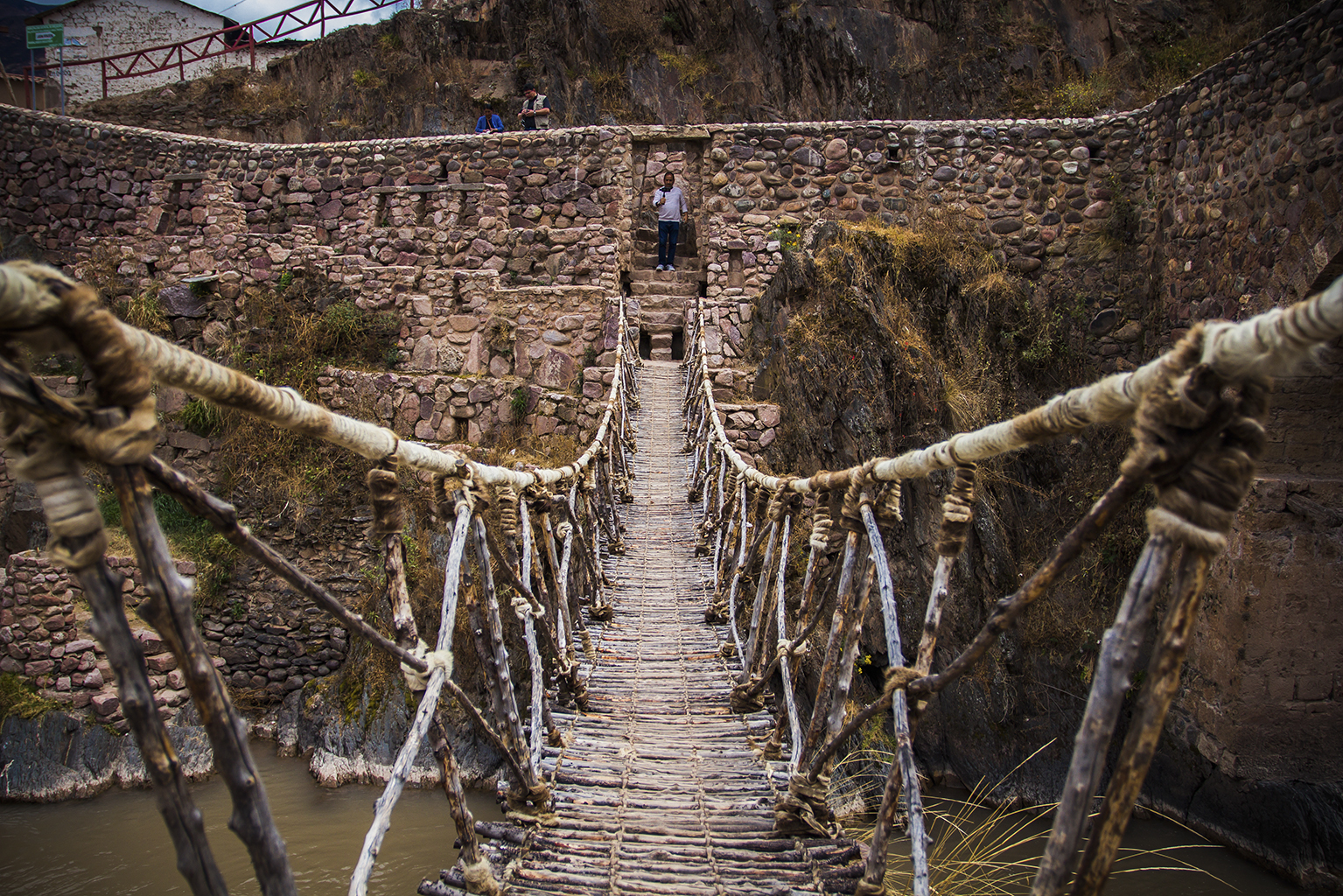 The second day starts with high expectations. We make a small stop in Machupuente, considered the oldest of the colonial bridges. Below it, a narrow canyon houses the Apurimac River between its walls and offers us such a beautiful landscape that it does not seem real. The blue tones of the sky and clouds are reflected in the river and form a picture where water and sky seem to be one.

The next stop is Maria Fortaleza, an archaeological centre that was part of a network of roads for the exchange of products. Here is also the starting point of the route to Tres Cañones and its walls that measure up to 300 meters high, formed by the erosive action of nature. The walk is exhausting, but the reward is great. After an hour of walking, we arrive at the rise and see the stone giants between the Callumani, Apurimac and Cerritambo rivers. After a few minutes delighting in the landscape, we descend to the space known as ‘the amphitheatre’ to have a different view of the canyons. The cold begins to be present to start our return to Cusco. 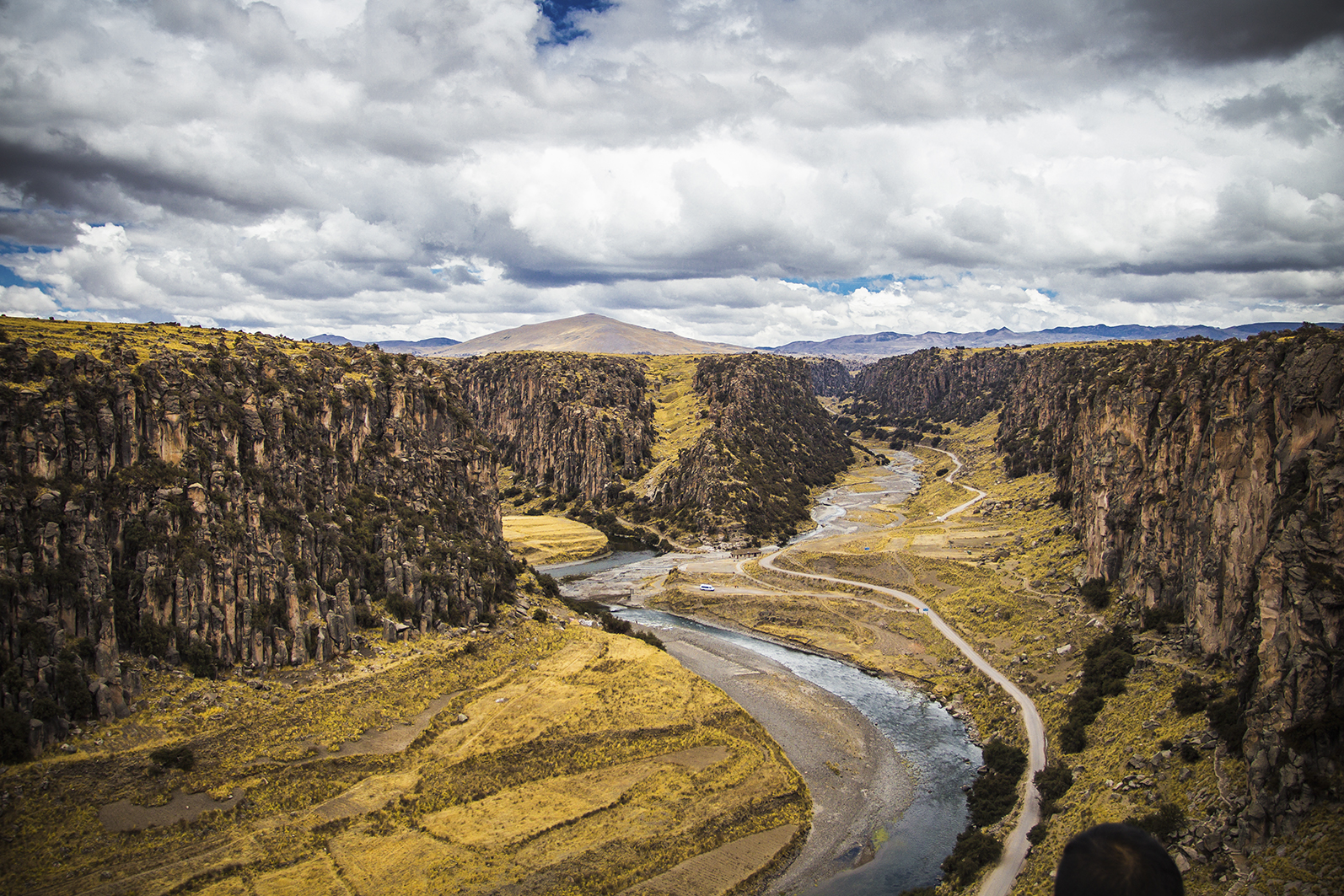 The third day promises to immerse ourselves in the ancestral culture of the Incas since we have as its next destination the Q’eswachaca bridge, whose annual renewal has been declared by UNESCO as Intangible Cultural Heritage. Suspended ten meters above the Apurimac River, Q’eswachaca is the only suspension bridge made entirely of plant fibres that are rewoven once a year since the Inca period.

Upon arrival in the district of Quehue, community members teach us about the braiding technique used in the renovation process. Crossing this 28-meter long bridge is an unparalleled experience that allows us to learn about one of the Inca traditions that have survived modernity, and that continues to pass from generation to generation. A great example of living culture. 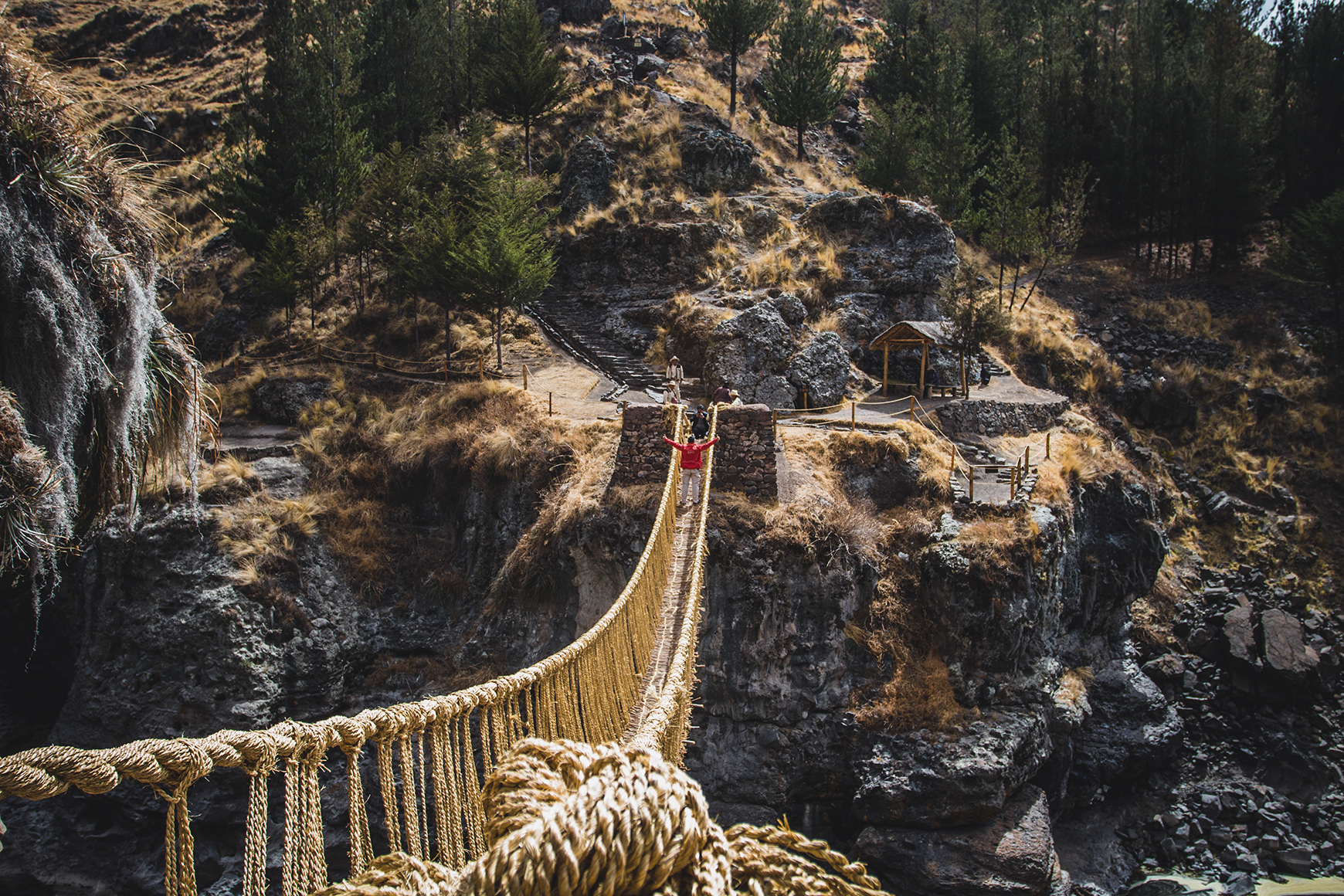 The last day is the most anticipated by many of the group because today we will go to meet Palcoyo, the seven-coloured mountain range. The ocher and red colours, with green and blue stripes, accompany us from the beginning of the road and give us a first taste of the visual spectacle that awaits us when we reach the top. Unlike Vinicunca, the walk to Palcoyo requires less physical effort and takes only an hour. Also, it receives a smaller influx of tourists, which allows us to enjoy the landscapes with tranquillity.

At the summit, we are welcomed by the members of the community with whom we perform an Earth payment ceremony. Our host asks us to lift our coca leaves high while thanking the Apus for the splendid view. After a few minutes of exploring, we begin the descent. The experience culminates with a visit to the Potato Museum to learn more about the great variety of potatoes in the area. The place also houses representative crafts and clothing. 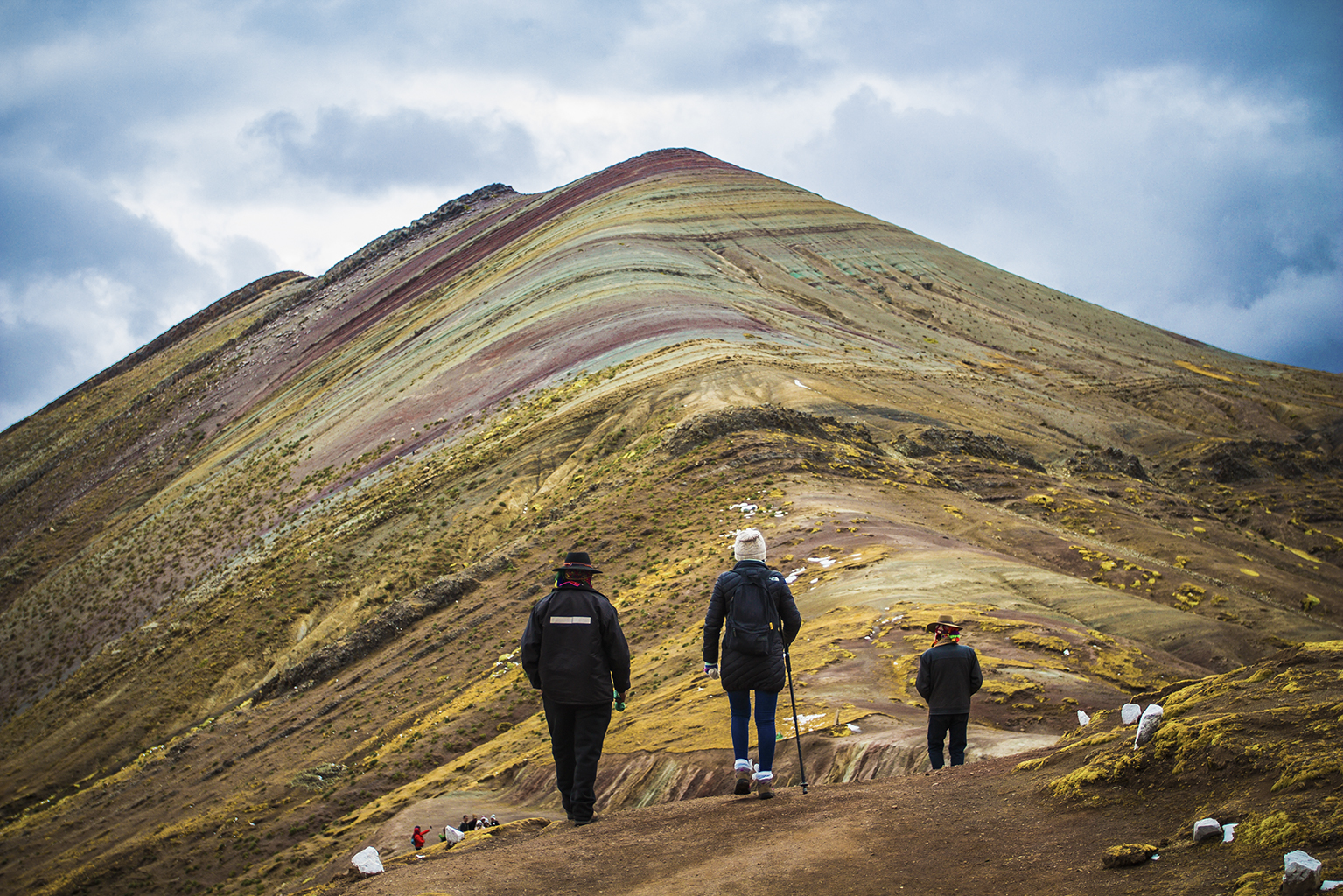 We have the opportunity to taste the potatoes selected by our guide. Some of the types stand out for their shapes and colours, very different from those we usually see in markets and restaurants. After a brief explanation, we say goodbye to our hosts, but not before thanking them for the experience.

We began the return to Cusco. Tiredness is undeniable, but the joy of having known such incredible places predominates. Our adventure comes to an end.