Ayacucho, a celebration of life

Easter week is one of the Catholic religion’s most important and representative traditions. Despite being celebrated across the globe, each area of the world has its own way of partaking in the festivities.

In Peru, where 70% of the population is thought to be Catholic, Easter Week is widely honoured. Nonetheless, there is a part of the country in which this holiday is not only celebrated for its significance, but also for the tradition and fervour that accompany its rituals.

In Ayacucho, located in Peru’s Sothern Andes, a church door opens in the pre-dawn darkness, letting out a brilliant gleam of light. The city’s main plaza is packed with people – from tourists to believers – all waiting, watching. The glow moves closer to the street and all of a sudden, a marvellous plinth over 10 meters high comes into view, holding a resurrected Jesus illuminated from head to foot with shining candles.

This fascinating and moving ritual dates back to the time of the Viceroyalty. The Spanish arrived in Peru with many traditions, including the celebration of the Holy Week. The conquistadors, inspired by the way this date was celebrated in Seville, adopted the tradition. Today, the Holy Week fiesta held in Ayacucho is considered the second most important celebration of its kind in the world, after the one held in Seville. 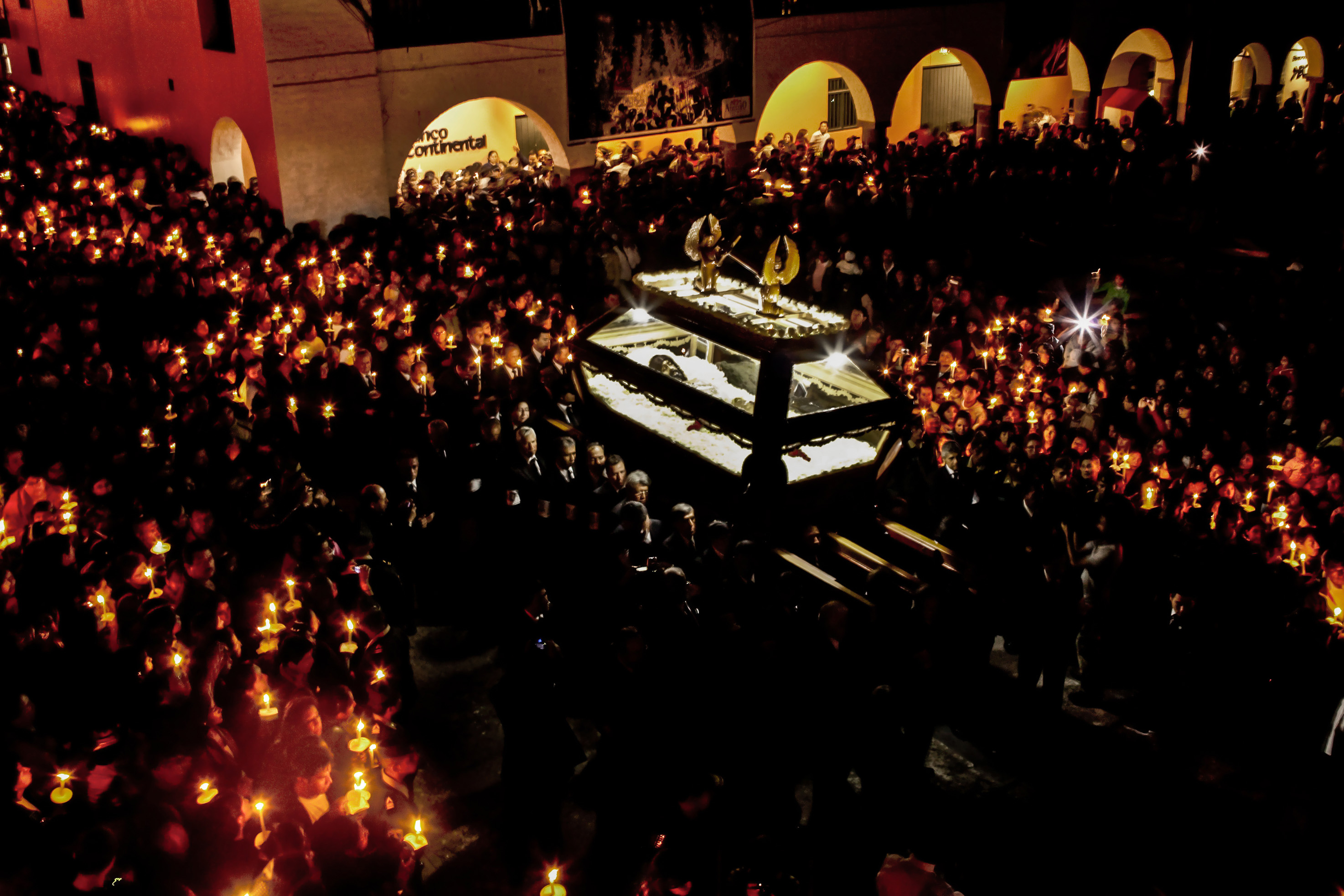 In Ayacucho, Easter Week lasts 10 days, beginning on the Friday before Palm Sunday. This day is marked by the procession of the Señor de Agonia, the Virgen Dolorosa, Saint John, and Veronica.

On Palm Sunday, Jesus enters the city as he did Jerusalem: riding a donkey, and surrounded by his apostles – 12 men dressed in traditional garments from the time. Meanwhile, the townspeople praise him with palm fronds in hand. Dry logs and palms are taken into the main plaza beforehand, where they will be used to light a grand fire on the last day of the celebration.

On Wednesday, the moving ‘Procession of the Encounter’ paralyzes the city as Jesus of Nazareth is taken through the streets until reaching the plinth holding Veronica. Upon reaching this point, Jesus is inclined, and his face is washed. Veronica then departs in search of Saint John and Mary. The Virgin Mary is subsequently brought into the main plaza where she watches as her son approaches the cross. All of a sudden, both figures halt, their faces illuminated only by the candles held by faithful devotees. In Ayacucho, every procession has a reason for being and a story to tell.

On Maundy Thursday the processions cease and the townspeople spend the day touring the city’s churches. Then, on the eve of Good Friday, silence descends and the streets of the city full with dozens of women dressed in black, who accompany the Virgen Dolorosa as she weeps and mourns before the Holy Tomb. 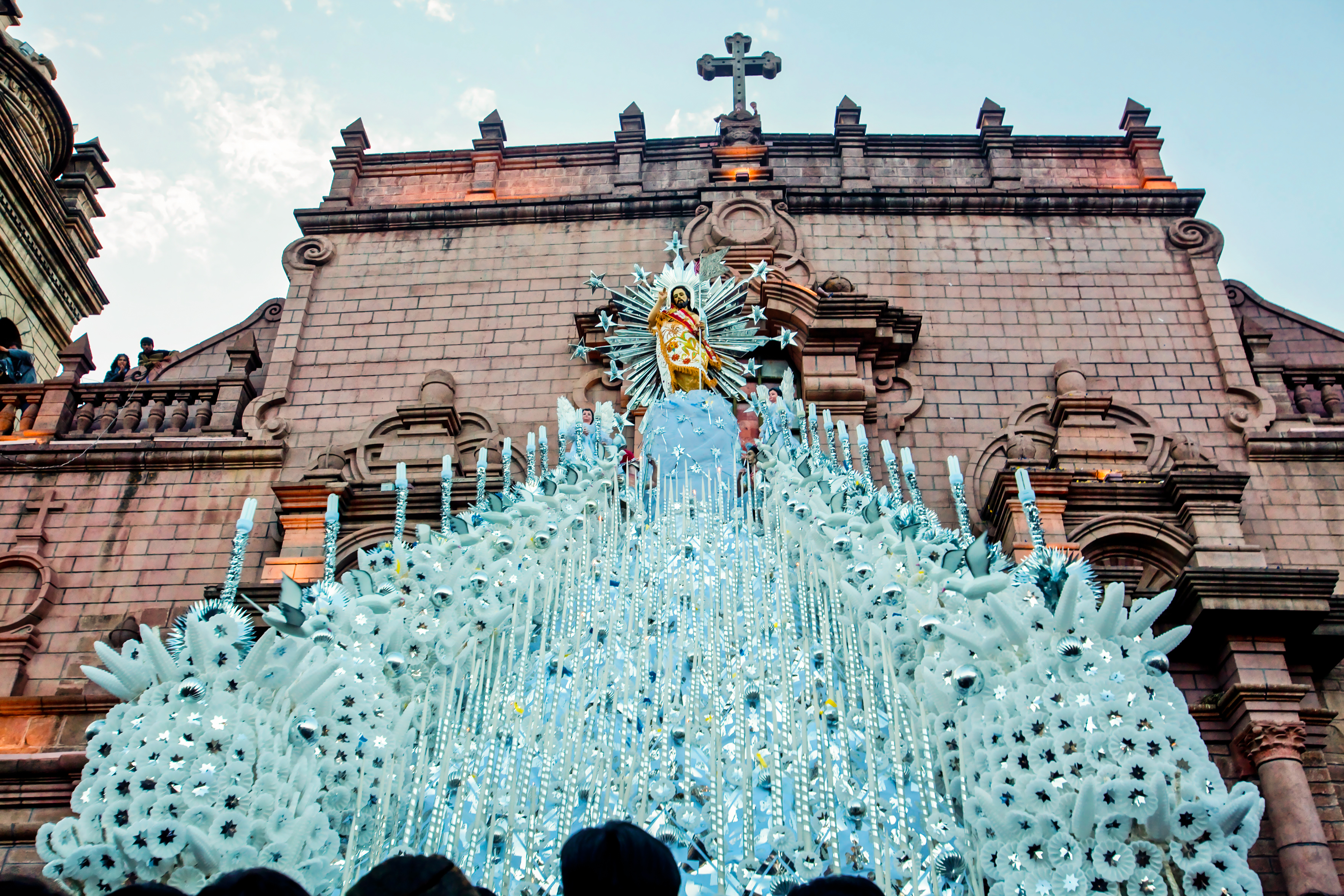 It is not until Saturday morning that the atmosphere turns festive, as church bells ring throughout the city, marking the beginning of the celebration. A grand, traditional fair takes over the Acuchimay hillside, featuring local products, crafts, and food. Meanwhile, in Huamanga, the Pascuatoro takes place, and a bull is released in the streets as spectators fee to avoid getting trampled – much in the same style of what is done in San Fermin, Spain. As evening descends, Ayacucho’s main plaza fills with people singing and dancing in celebration.

Then, back where we started: Easter Sunday, at the foot of Jesus’ plinth. Each detail on it has a specific significance that seamlessly ties in with the Andean worldview. Its triangular shape represents the mountains, the Apus; the wax figures that adorn it are in the shape of flowers and corn – offerings typically used to request a good harvest. As the plinth slowly advances through the crowds, making its way to the plaza, hundreds of people take turns carrying it on their shoulders. Here, it is not about an exclusive brotherhood. It is the very townspeople who give life to one of the most important cultural expressions in Peru and the world.