I heard about Huancaya for years, about that Andes piece in Lima that contrasts with the desert with which we live together. That place of blue sky and turquoise lagoons, different from the winter clouds and our dark-kind sea. Finally, the day arrived.

The best time to leave for Huancaya is early in the morning, not only to avoid traffic but to take advantage of the good weather and appreciate the beautiful landscapes. Seven hours on the way are waiting for us, passing through several towns as we penetrate the highlands of Lima. Time passes and, with it, the landscape is transformed: the first mountains that are no longer covered with sand appear, the sky clears and leaves behind the typical rain of the capital and a river - now more abundant - is planted at the side of the road. 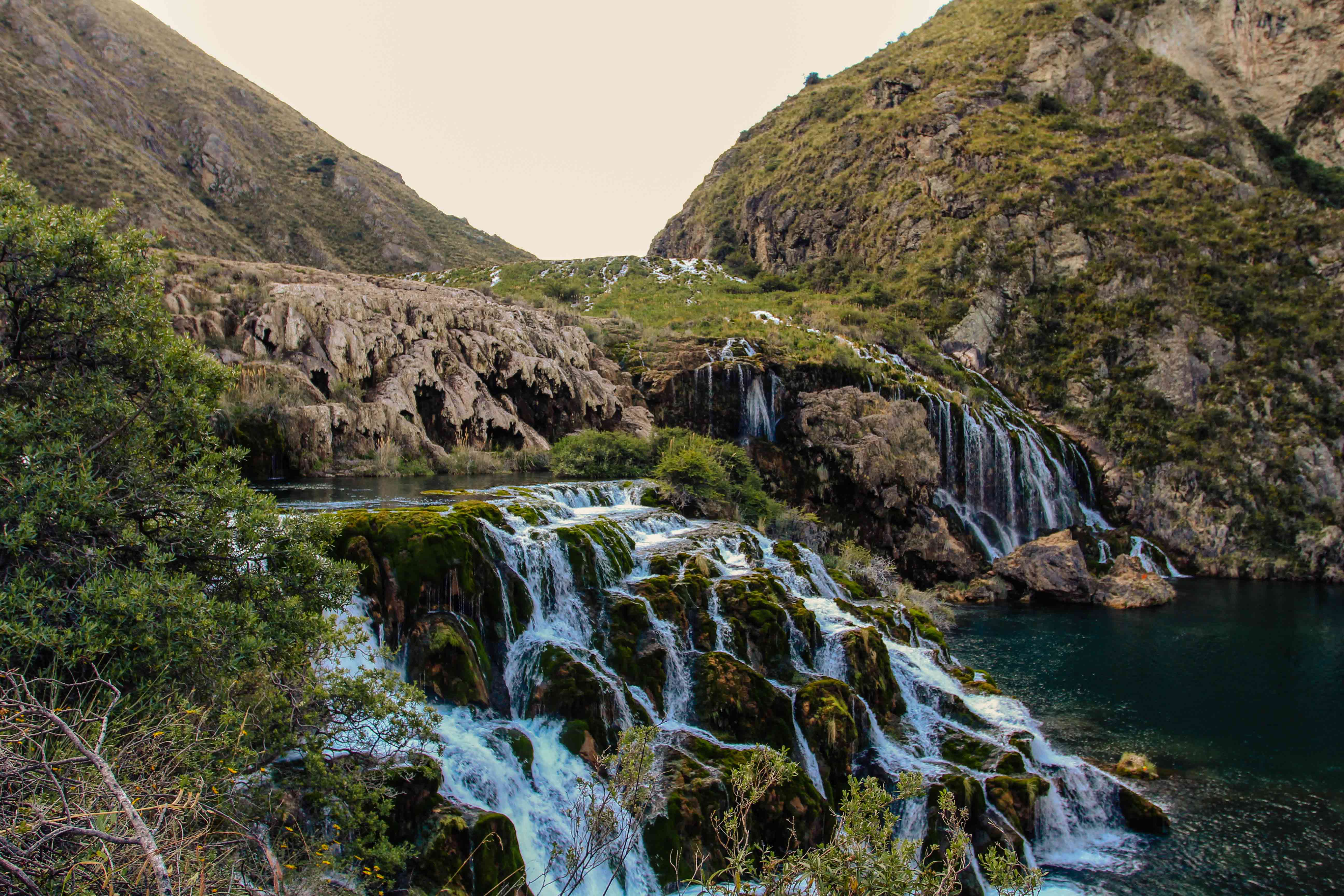 Huancaya is part of the Nor Yauyos Cochas Landscape Reserve, famous for its numerous waterfalls and crystalline lagoons. Foxes, divers, herons, trouts and other animals can be seen along its more than 221 thousand hectares between the departments of Lima and Junin, as well as beautiful queñuales forests that coexist with high Andean ecosystems. The towns of the area are small, with a lovely mix of colonial and Andean buildings, where the peasant communities coexist in harmony with nature.

The first stop is the Huallhua lagoon, extensive, blue, extraordinary. However, you have to get on a boat and row a little to discover it in all its splendour with a series of staggered waterfalls that demonstrate the capricious power of nature. Seeing them up close is surprising, either from the gazebo or feeling its strength in the palm of your hand. After that, a walk of just over an hour brings us back to Huancaya, through a path surrounded by colourful flowers, always accompanied by the sound of the nearby waterfalls and with a panoramic view of the dozens of small lakes and streams. 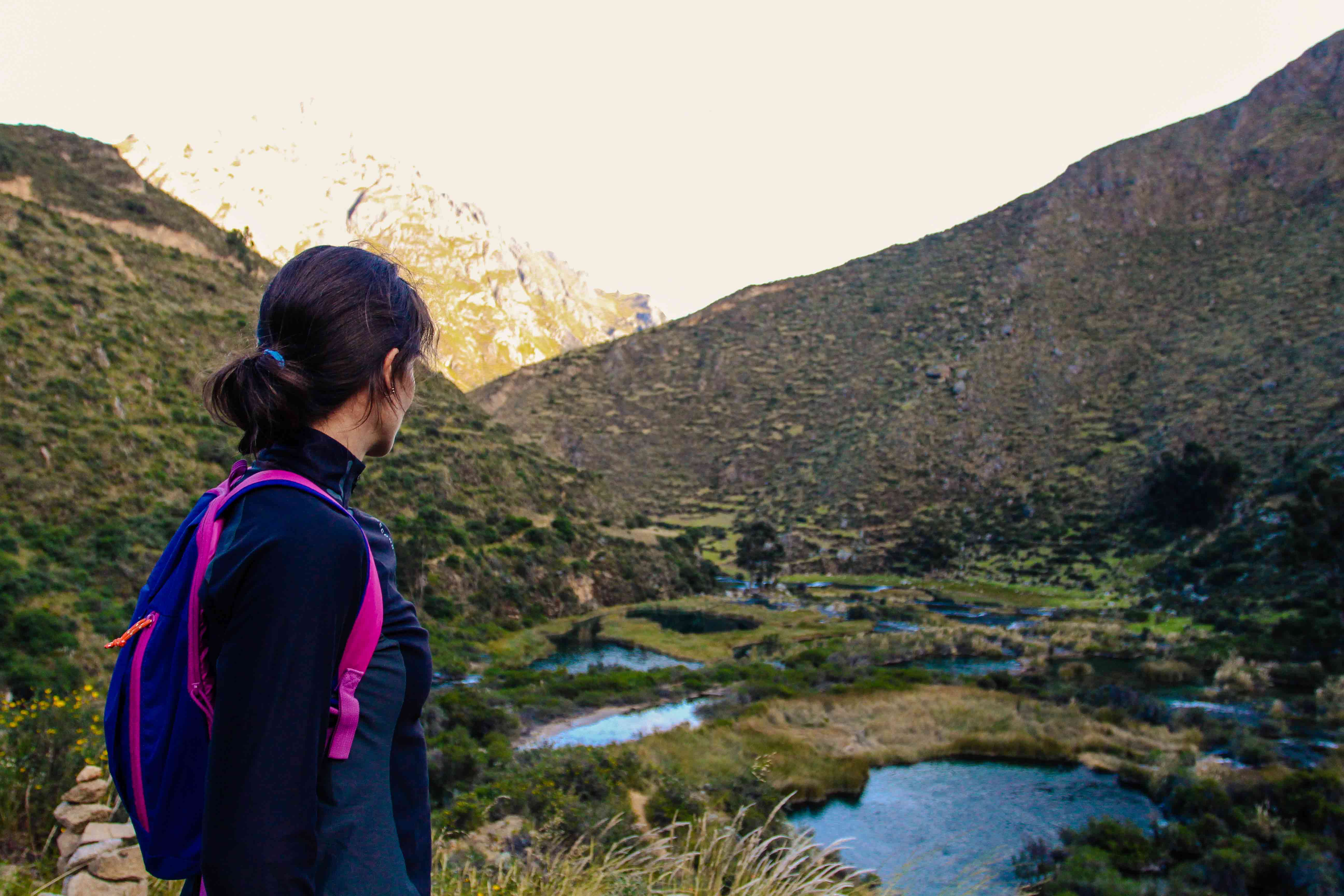 The real adventure begins on the second day. Today we are looking for the real protagonist of this story: the Qhapaq Ñan, that incredible road of more than 60 thousand kilometres built by the Incas to unite all their empire. More than 500 years ago, the current reserve was crossed by a transversal route that linked the administrative centre of Hatun Xauxa in the central highlands with the Pachacamac sanctuary on the coast, passing at the foot of the imposing Apu Pariacaca and leaving an incalculable historical legacy.

The morning starts early — three hours by car separate Huancaya from Sacsha, where the old Inca road intersects with the road. From there, at 4,600 meters above sea level, we embark on a journey through the history of the largest empire in South America. Step by step, we ascend to almost 4,800 meters to Portachuelo, where an 'apacheta' (little constructions made of stones) accompanies the first vision we have of the sensational Andean landscape, with chains of mountains that expand in the distance and an icy wind that welcomes us and reconfirms that we are far away from home. The payment to the Pachamama is paramount, praying to be free of any danger and asking the Apus for permission to enter their domains. 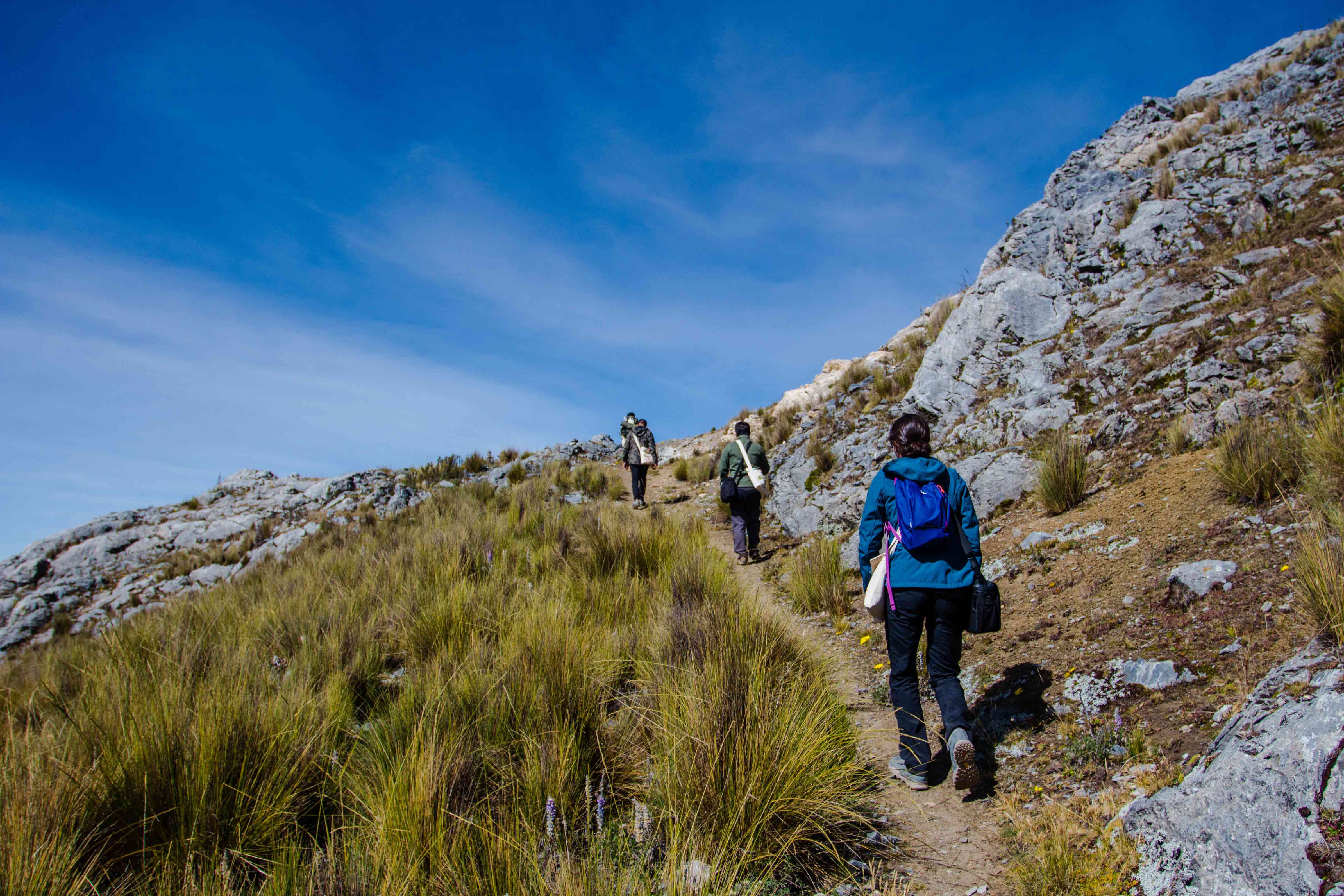 The descent start. The cold wind begins to warm up (or maybe it is the physical demand that this trek implies) and the terrain is transformed again, giving way to a cobbled path that shows the route to follow. Those of us who have visited the Qhapaq Ñan at some time, recognize that we have a well-preserved part of the road in front of us, and we are not mistaken. The first slopes are evidence that we are in the long-awaited section of Escalerayoc, and soon the hundreds of steps that compose it appear before our eyes.

Step by step, we approach the bottom of the stairs. The view is unique, a sign of the constructive mastery of the Incas, who managed to design this spectacular path in total communion with nature. A small stop for lunch in a quiet place, whose peace is only interrupted by the ringing of the bells of our group of cargo llamas. Why do we use llamas? Because the delicacy of its paws is perfect for travelling this type of ancient roads without damaging them and, also, because having them is equivalent to income for local carriers; an animal care technique that is being replaced and forgotten by the use of other types of animals or vehicles. 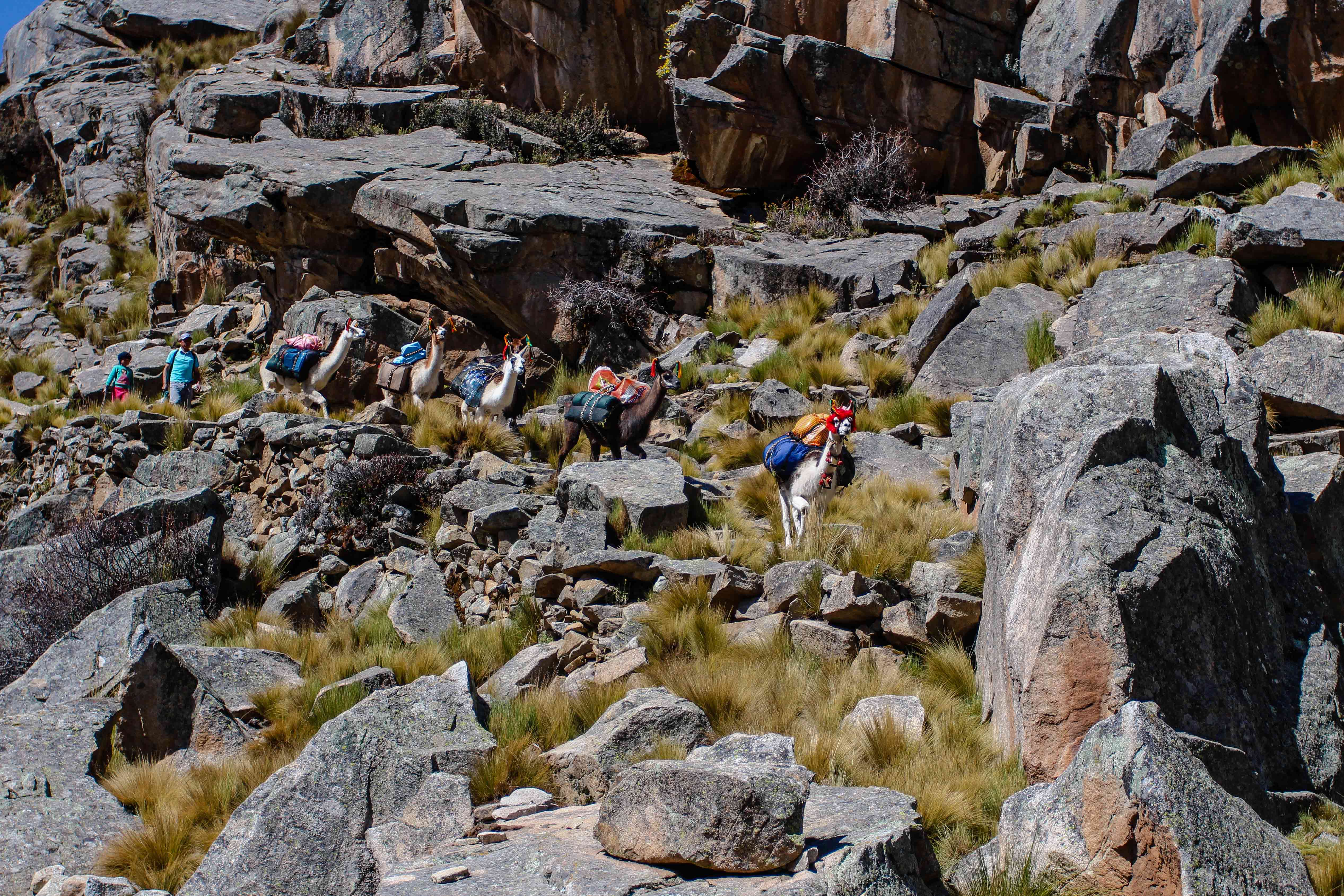 A quick visit to the cave of Cuchimachay and its cave paintings of more than 8,000 years old, with pregnant vicuñas that indicate it could be a place destined for fertility rituals. We keep walking through the rock formation known as 'Culebrayoc' and its unusual snake shape. The mythology says that the deities of Huallallo Carhuancho and Pariacaca clashed here. Huallallo, associated with fire, sacrifices and the world of the dead, sent a burning snake to Pariacaca and he petrified it. As we advance, in the distance, we see for the first time the Mullucocha lagoon, of exceptional blue waters and impressive size. The Pariacaca, as a good guardian, remains firm by our side.

The route continues bordering Mullucocha, whose name derives from the 'mullu' or Spondylus, the sacred shell of the Incas that they say formed the island in the middle of it. With every step, the lack of air is back, the sign of the last ascent of the day until the 4,500 meters of the Masho pass. Then we go down, but the way is still long to Tambo Real where we will sleep. The night is falling, the forces weakening, the cold penetrating to the bones; It is the easiest part of the walk, however, the hours of activity begin to take their toll. Finally, after one or another fall in a swampy terrain to liven up the night, we reached the goal. The award? A beautiful starry sky, with the bright Milky Way above our heads, of those that only give you the Apus and that you have to thank. 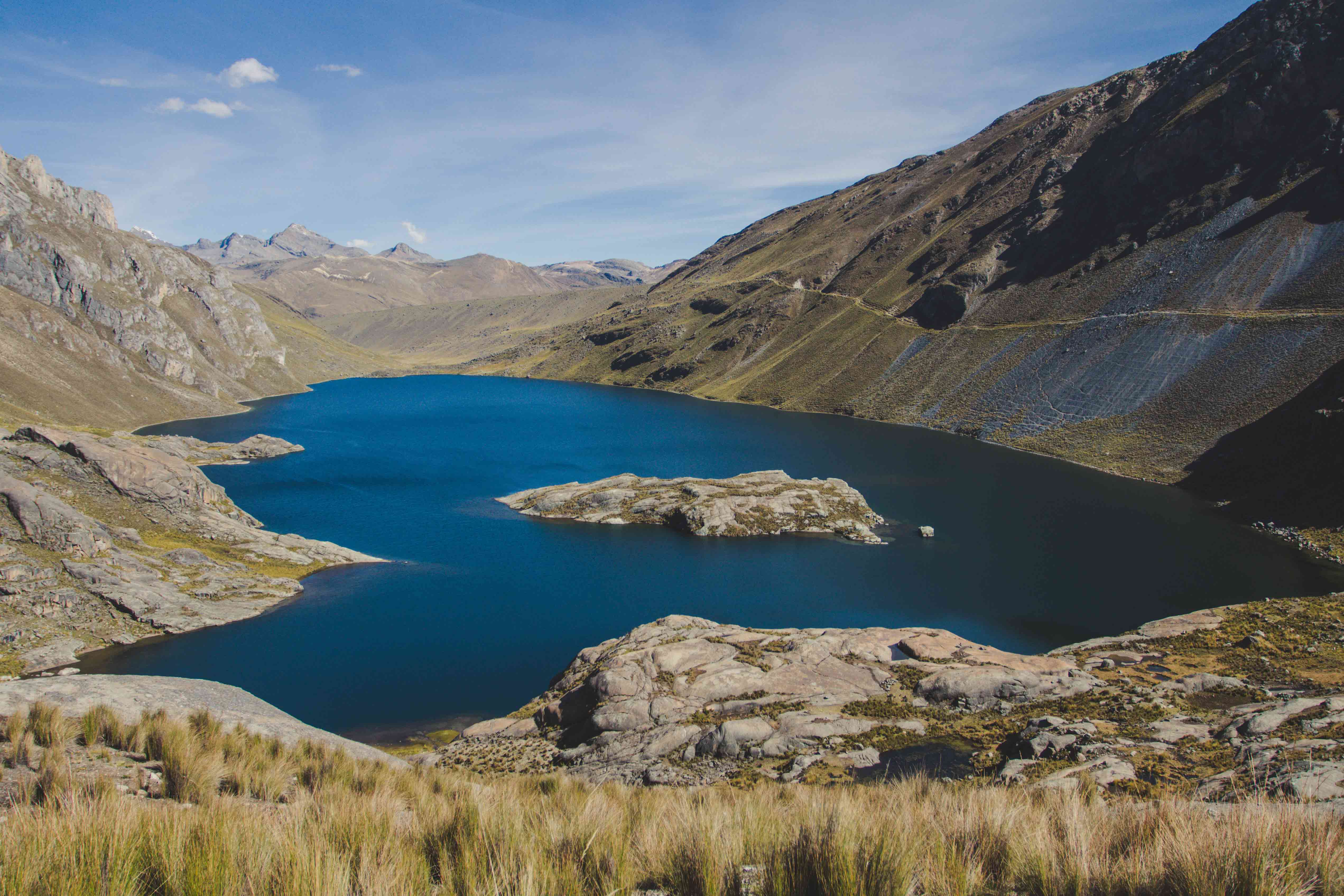 Where we are, there is no alarm clock. The sunlight and the morning heat force us to stretch and leave the tent. The day promises to be hard, so it is advisable to walk light and replace warm clothes with plenty of bottles of water in our backpacks. A few meters to start, the Pariacaca say hello to us on the Piticocha lagoon. Motorcycles, vans and even bicycles pass us by a path, but the easy way is not for the adventurers. We left the marked route to face each other with the challenge of today: the Ocsha pass at almost 4,800 meters above sea level.

The lack of air is back again, but the desire to reach the top is enough to keep going. Halfway. A small house is the closest thing we see to something created by man, with thatched roofs and a perfect corral to spend the night - a hard camp, without a doubt. Around us, nothing. Just nature, rocks, slopes and the Apu Pariacaca in the distance. One last effort to reach the top. The llamas and its carrier, Peter, seem not to feel stuck. Finally, we are up. Another 'apacheta' and a small chapel is the only thing we can find on top. All we have to do is say goodbye to Pariacaca and its dazzling whiteness, because the descent will take us straight to a valley where the only contact we will have with it will be the water of its inevitable melting. 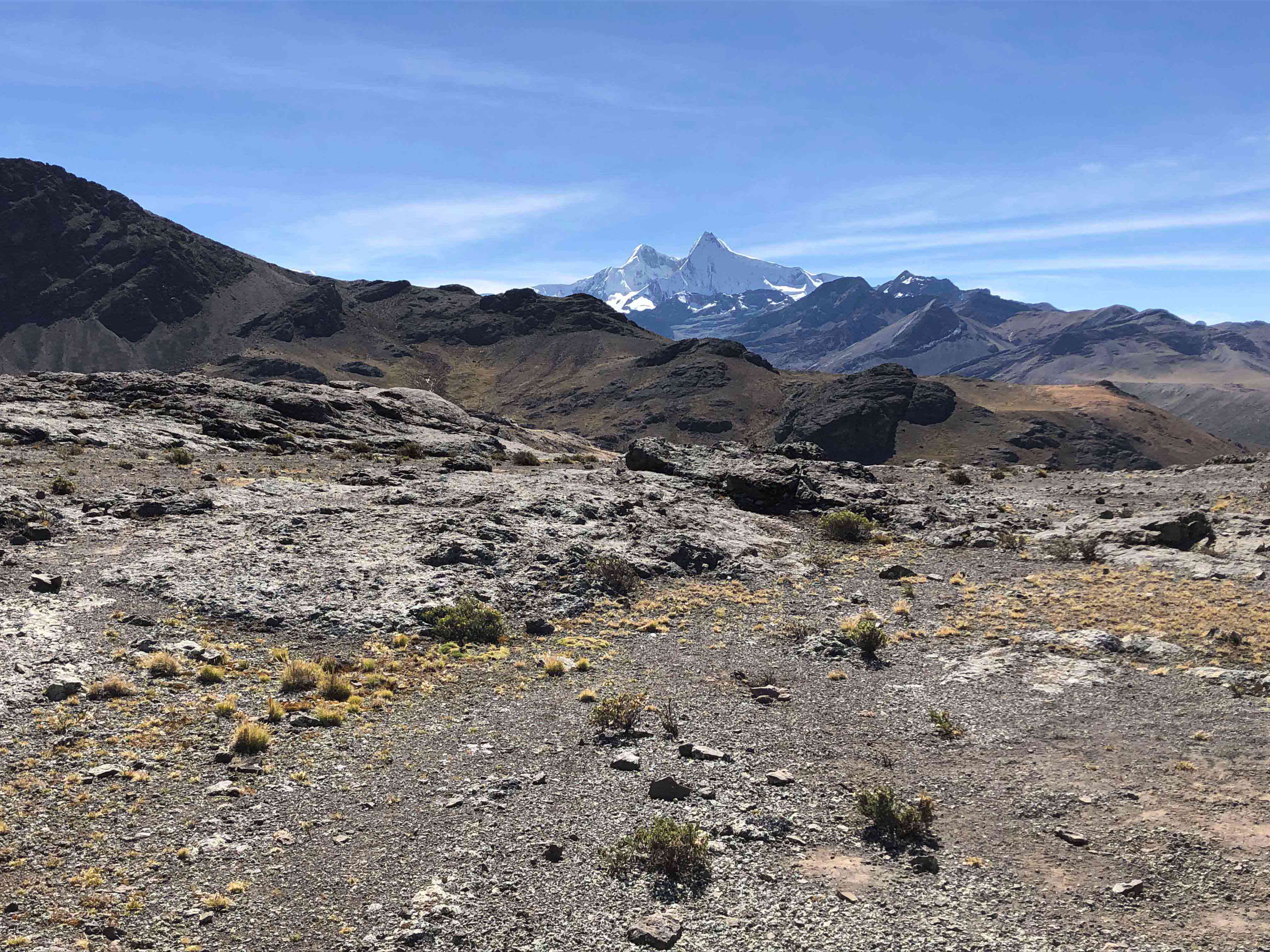 As we get closer to sea level, the temperature rises again. The beginning of the slope of the Mala River is marking the route, giving the landscape an incipient green tone that increases as we walk. The crystalline - but icy - water invites you to cool off, but there is no time to waste if you want to reach our destination with no delays. We keep moving, accompanied by its soft sound that floods the environment, among the small streams that unify and create beautiful waterfalls.

Soon, we are walking among "zapatitos" (yellow flowers in a way similar to a small shoe), the odd daisy and many - MANY - beautiful but thorny flowers that make us contort as we move along the narrow trail. Between ups and downs, jumps not to fall into the mud and good dose of sunblock, our remnant of Inca road reconnects with the highway that we saw early in the distance. Just like the first day, old and modern at the same point. Officially, we're back. 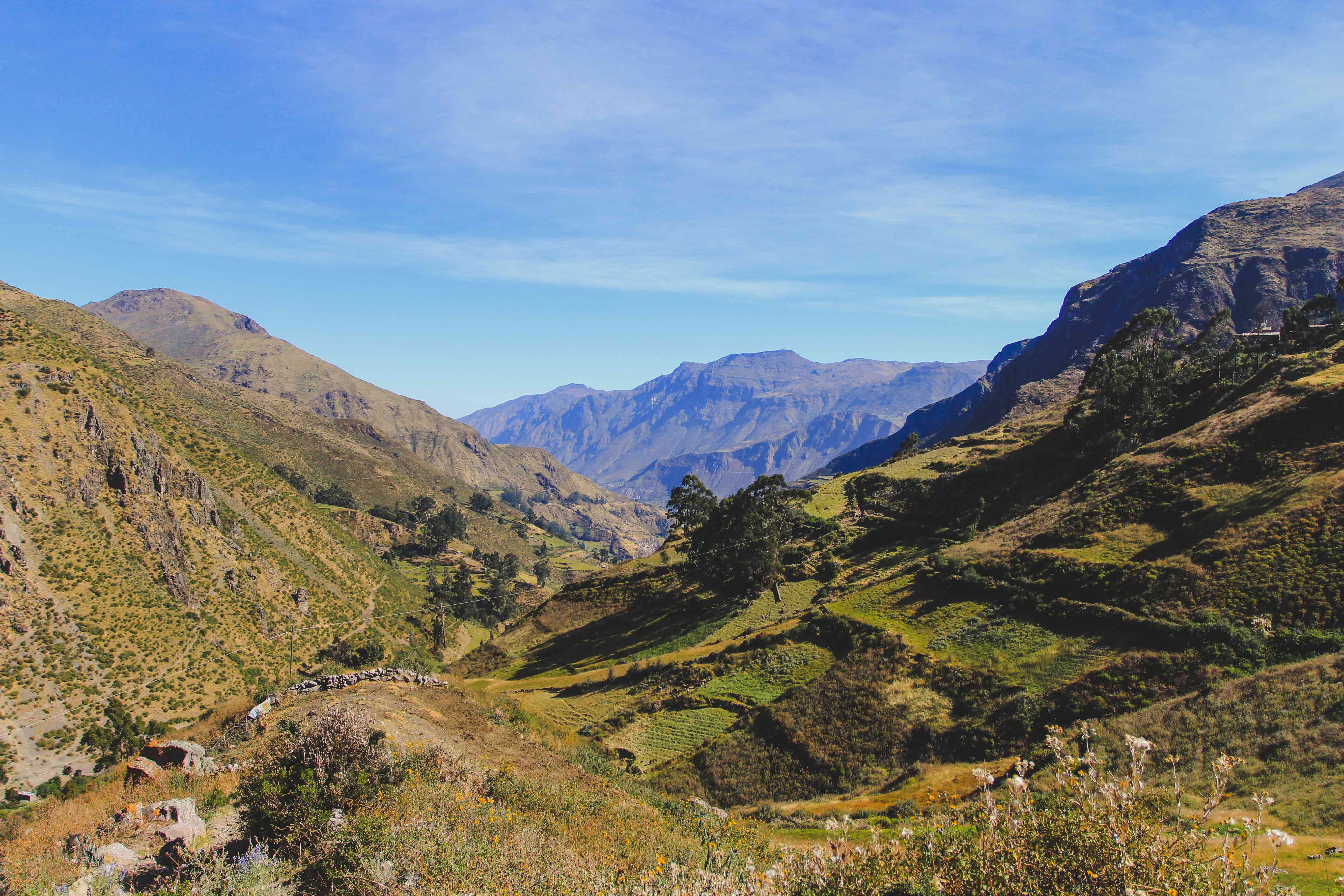 The trucks wait for us to take us back home. One last look through the window of that Andean landscape, before the mountains lose their greenness to become rocks, and the flowers give way to the houses of the towns, bigger and bigger until they reach the city. But the experience remains, and the satisfaction of having walked the same steps of the Incas a few hours from Lima.